Amid the steady development of the gaming and tourism industries in Macao in the past two decades, the development of manufacturing has been tamer than in its heyday. But given the push by the Macao Special Administrative Region (SAR) Government in advocating for the sustainable transformation and upgrade of manufacturing, a number of companies have invested in setting up factories in the city to make various products, including medical supplies, food and beverages.

Macao Image spoke to two companies about how the Macao Trade and Investment Promotion Institute (IPIM) “One-stop Service” for Investors has provided all-round support and assisted them in setting up, respectively, a face mask factory and a coffee processing plant, as well as in exploring local and overseas markets.

The outbreak of COVID-19 has drastically changed the lives of people around the world. Face masks have become an everyday necessity for almost everyone. As Macao did not have a face mask factory before the onset of the pandemic, the city had to rely on imports of face masks from Mainland China and abroad. In the light of the tight supply of face masks in early 2020, three Macao residents decided to set up Macaufacture Medical Supplies Ltd. and invested in setting up a face mask factory to help stabilise supply.

Ms Amy Chan, General Manager of Macaufacture, said that although the shareholders and managers of her company had had experience of running medical clinics and engineering projects, setting up a face mask factory was a novel undertaking for them, as they were unfamiliar with the procedure and requirements.

“Thanks to the support of IPIM, the Macao Economic Bureau, the Health Bureau and other government departments – particularly IPIM’s ‘One-stop Service’ for Investors, which worked as a coordination and communication platform – our face mask factory was successfully inaugurated,” Ms Chan said. “From the set-up of our company, to how to establish a factory that complies with the requirements for attaining an industrial permit, like the Fire Services Ordinance, to applying for imported labour quota, the ‘One-stop Service’ has given us a lot of support,” she added.

IPIM staff also reminded Macaufacture of things it needed to attend to during different stages of the process, and would actively refer them to relevant entities and departments for enquiries when facing situations beyond IPIM’s scope, noted Ms Chan. “For instance, only after being informed by IPIM, were we aware that the Macau Productivity and Technology Transfer Center provides subsidies for face mask quality tests,” she said.

The masks produced by Macaufacture, branded “853 Mask”, are now available at local pharmacies and convenience stores, and the company also supplies its masks – which have attained quality certifications in Mainland China, Europe and the United States – to local small firms and large corporations. The company has also started exporting its masks to Portugal since October 2020, making Macaufacture the first Macao firm that could export face masks and sell them in the European Union.

“It might still take us some time for our operations to be profitable, but we will maintain high standards for our products in a bid to create a ‘Made in Macao’ brand appealing to local and overseas consumers,” she said.

Mr Charles Shi, Chairman of Charlestrong Coffee Co. Ltd., is another entrepreneur that commends IPIM’s “One-stop Service” for Investors. Mr Shi is an expert in the field of infrastructure and mining, and is particularly experienced in developing housing and other infrastructure projects in Portuguese-speaking Countries via Charlestrong Engineering Technology and Consulting (Macau) Ltd.

During numerous visits to Portuguese-speaking Countries, the entrepreneur became aware of the quality of organic coffee beans grown in Timor-Leste. Thus, he started mulling the possibility of setting up a coffee factory in Macao, importing coffee beans from Timor-Leste and processing the beans and packaging the relevant products in Macao, leading to the launch of a series of coffee products under the brand “Café Diliy”.

Seeing that his other businesses have been well supported by IPIM, Mr Shi said it was clear that his project to establish Charlestrong Coffee and its processing plant could get help from IPIM’s “One-stop Service” for Investors. After it was established in July 2019, Charlestrong Coffee spent about a year to transform an old industrial unit with 5,000 square feet of floor space in Areia Preta into a coffee processing plant. The plant was granted an industrial permit in July 2020.

“IPIM has taken great care of us at every stage of this process, and followed up on our progress,” Mr Shi said. “When we had any abrupt challenges, it would also actively help us out. These are all the reasons why we could set up a factory in Macao so swiftly.”

Café Diliy has established itself in the Macao market, with its products in MGM restaurants and shops, and at the online shopping mall run by Nam Kwong, a Chinese state-owned enterprise. On the recommendation of IPIM, Charlestrong Coffee has exhibited at major trade events such as the MIF, and held meetings with enterprises and other entities in Macao to discuss business, Mr Shi said. He said this could help the Café Diliy brand have a greater presence in the market.

For now, development of the business has been stalled by the pandemic. “However, with the stabilisation of the pandemic and the resumption of visitor arrivals to the city, the local business environment will gradually recover,” Mr Shi said. “If the number of visitors to the city could get back to pre-pandemic levels, receiving nearly 40 million visitors in 2019, this enormous number of travellers and residents here could prove enough demand for our business volume at the moment,” he added.

The company is now looking for a newer, bigger place in Macao to relocate its processing plant so that its production capacity can increase to transform 5,000 tonnes of coffee beans a year. The company may venture into the Mainland Chinese market in the future. “The goals for this coffee brand are very straightforward: helping the Portuguese-speaking Country Timor-Leste achieve prosperity through coffee exports, while creating a ‘Made in Macao’ brand so that more people around the world can know about Macao and the Portuguese-speaking Countries through our products,” Mr Shi said. 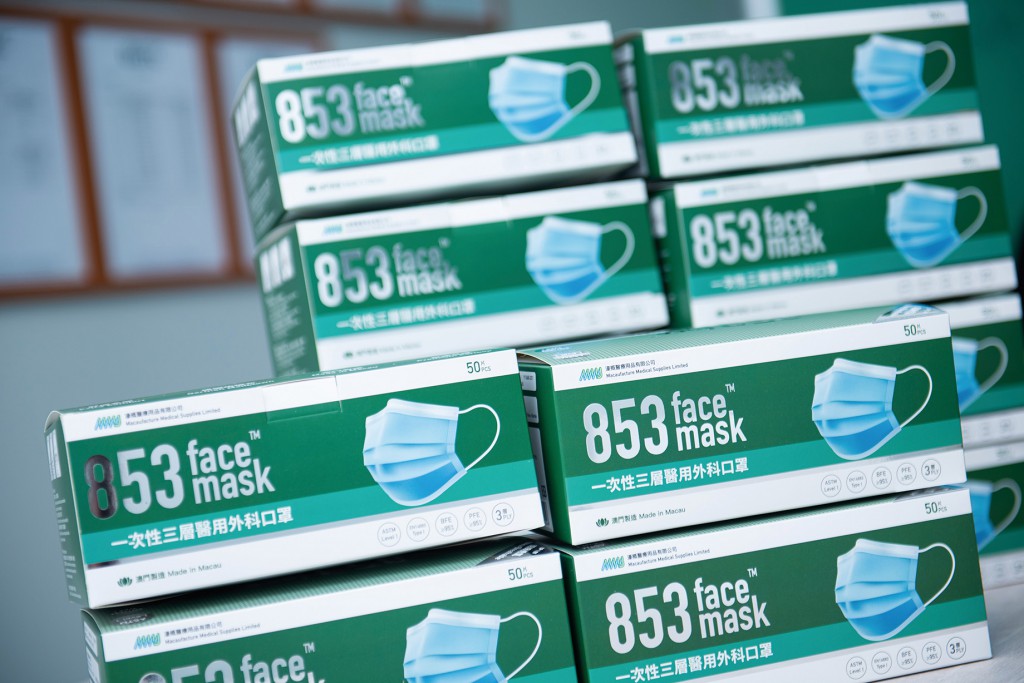 853 Mask has attained quality certifications in Mainland China, Europe and the United States 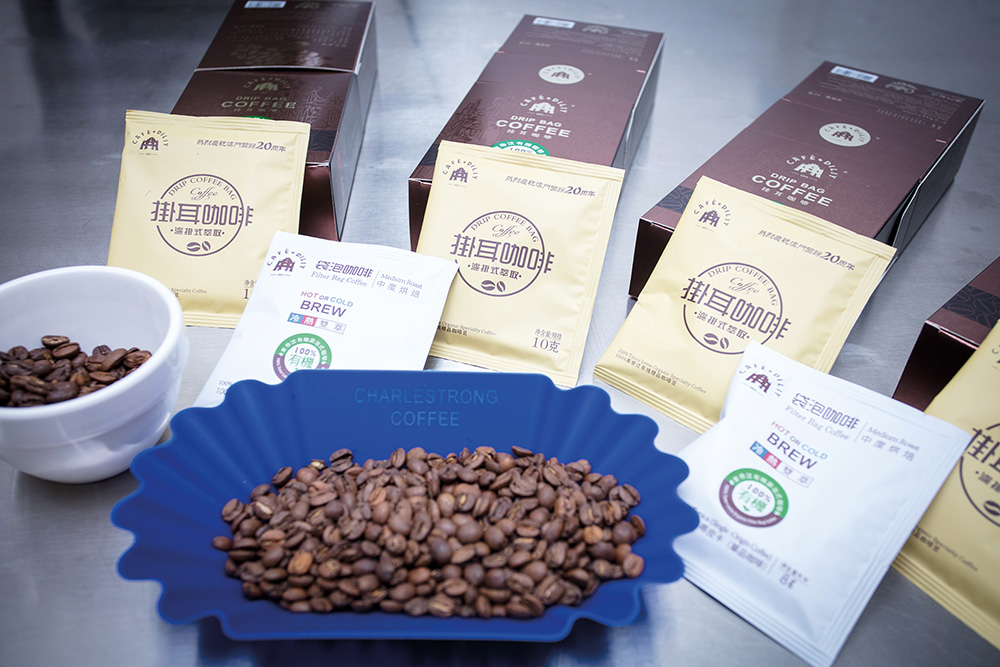 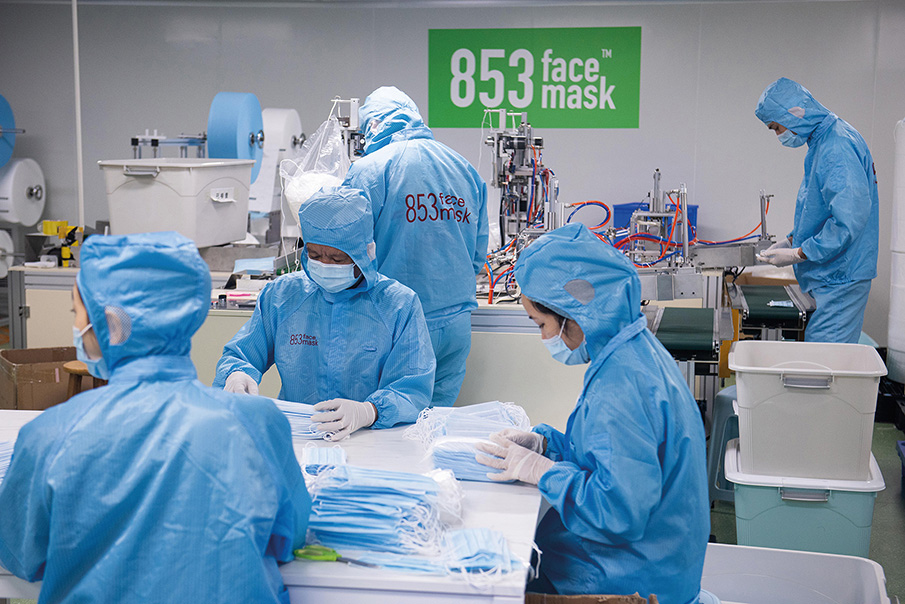 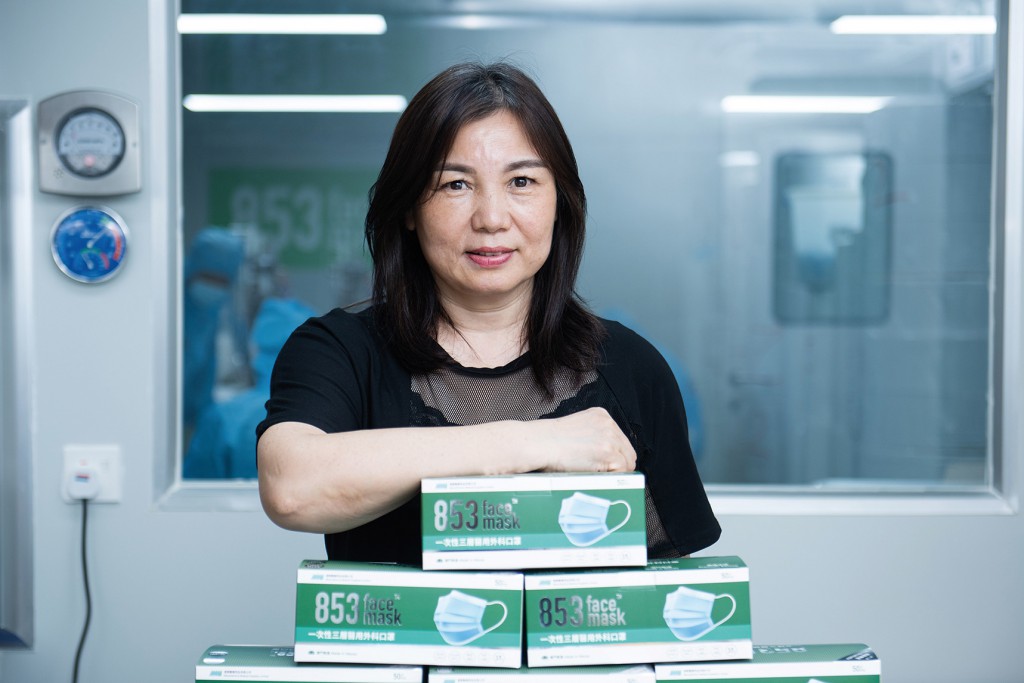 “From the set-up of our company, to how to establish a factory that complies with the requirements for attaining an industrial permit, like the Fire Services Ordinance, to applying for imported labour quota, the ‘One-stop Service’ has given us a lot of support.” Ms Amy Chan, General Manager of Macaufacture Medical Supplies Ltd. 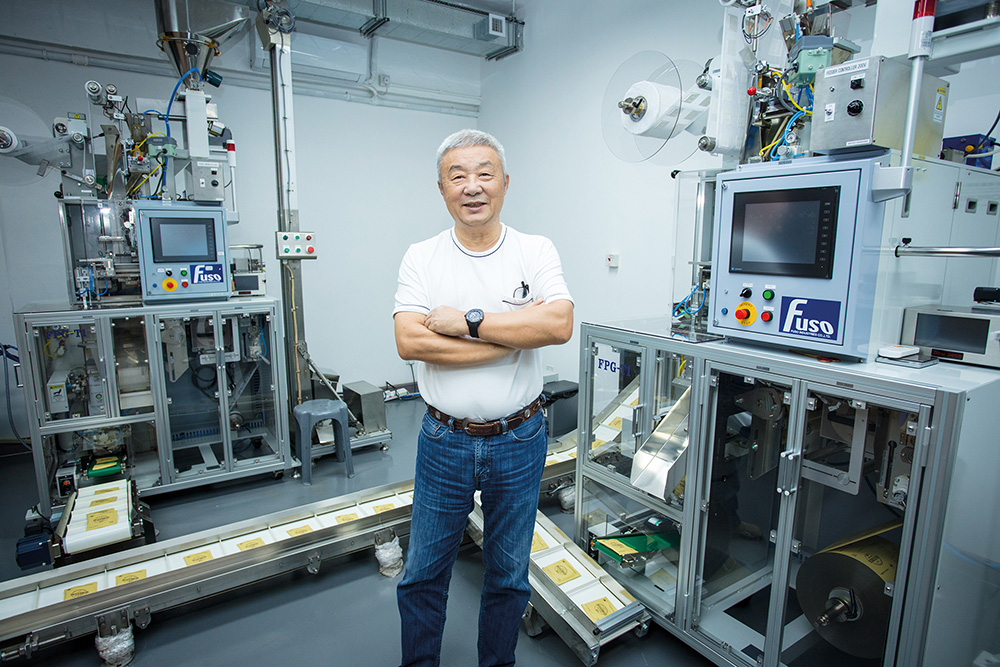 “The goals for this coffee brand are very straightforward: helping the Portuguese-speaking Country Timor-Leste achieve prosperity through coffee exports, while creating a ‘Made in Macao’ brand.” Mr Charles Shi, Chairman of Charlestrong Coffee Co. Ltd. 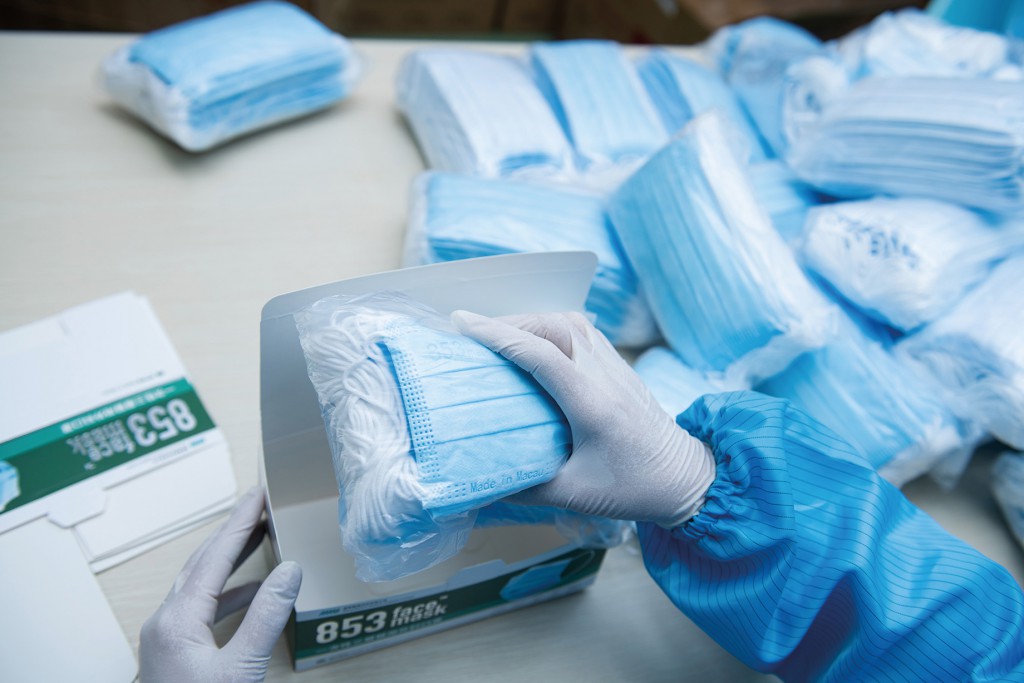 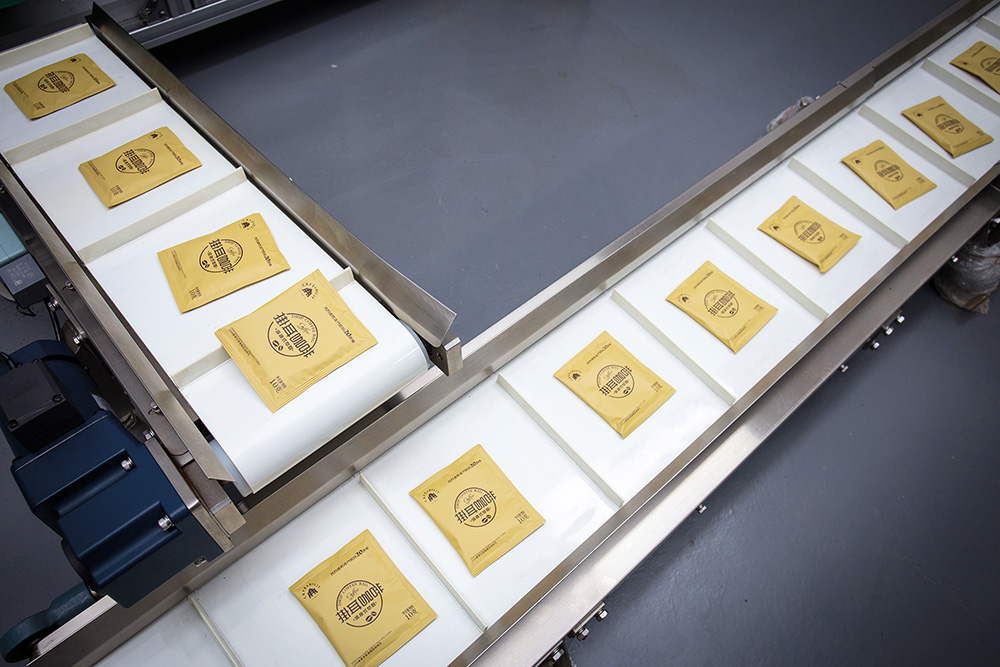 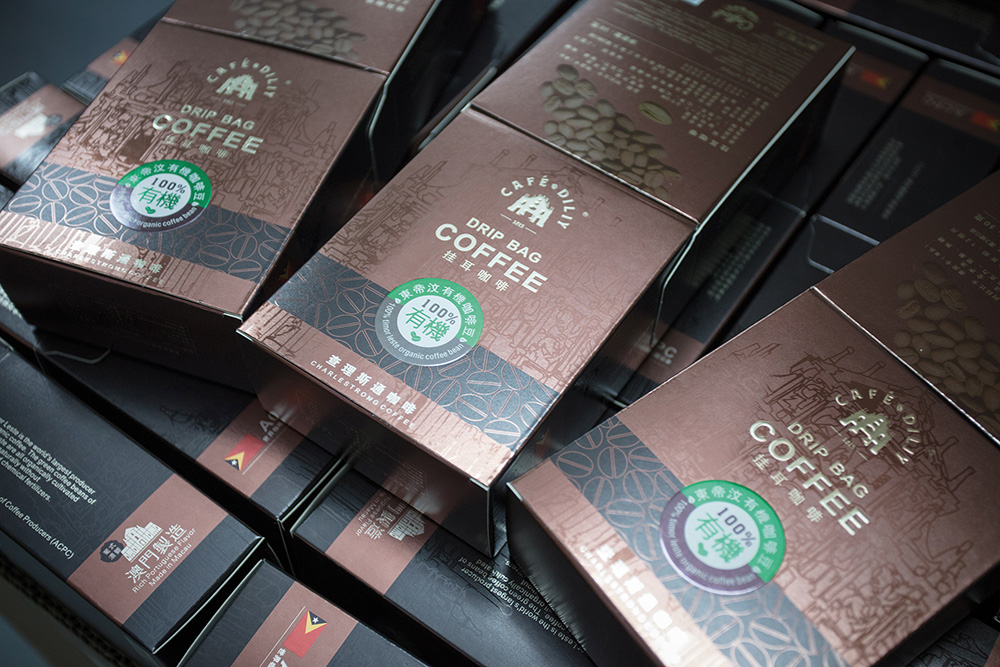