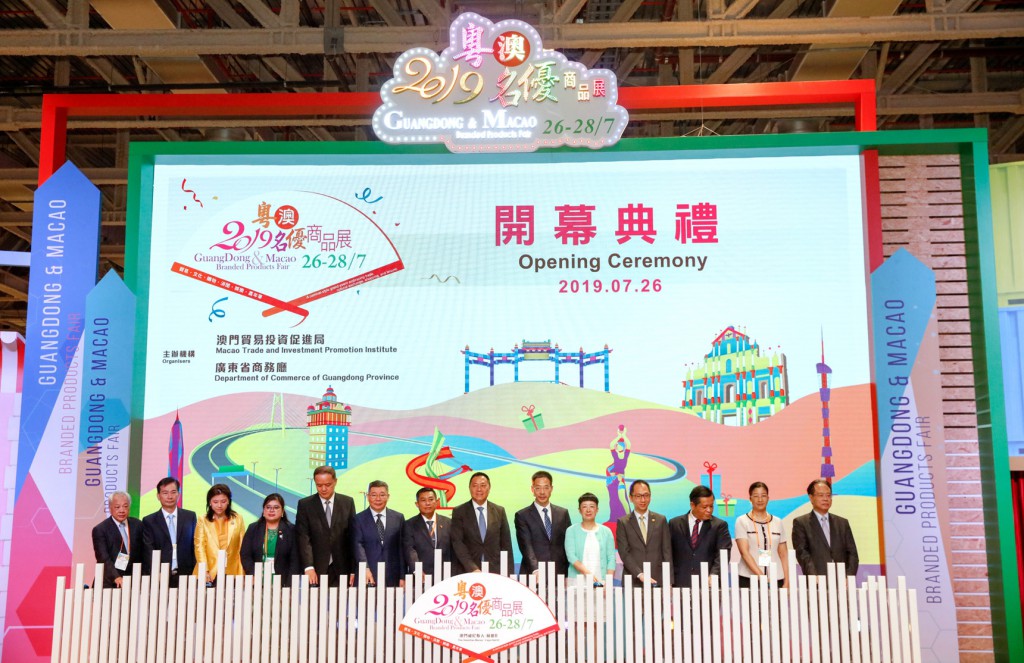 The 2019 Guangdong & Macao Branded Products Fair (2019GMBPF), jointly hosted by IPIM and the Department of Commerce of Guangdong Province, was held at The Venetian Macao from July 26 to 28. This year’s GMBPF continued to incorporate various elements such as trade, cultural exchange, shopping, recreation and entertainment. The venue was filled with lively atmosphere.

This year the exhibition area covered 9,000 square metres, whereon more than 400 booths were set up, a greater number compared to that of the last year. The 175 booths in the Guangdong exhibition area displayed branded products including food, daily necessities, household appliances and gifts from all over the province. Many products are credited with “China Branded Products”, “China Famous Brand” and “Guangdong Branded Products”. The 102 exhibition booths in the Macao exhibition area are largely “Made in Macao”, “Macao Brand”, “Designed in Macao” products and other cultural and creative products from Macao, as well as products from Portuguese-speaking Countries distributed by Macao businesses, so as to show the characteristics of Macao brands to the general public. On the first day, the “Round Table Meeting for Commercial Institutions in Guangdong-Hong Kong-Macao Greater Bay Area” was held. In addition, there were multiple “check points” and “game points” at the venue, attracting many visitors to take photos and try out the games.

The “Belt and Road Exhibition Zone” has nearly one hundred booths, including the newly added “Thailand Pavilion” and those set up last year, including the “Indonesia Pavilion”, “Myanmar Pavilion” and “Malaysia Pavilion”. To be in line with the “Agreement on Promoting Foreign Trade and Development via MICE Industry” signed by IPIM and Congjiang county of Guizhou Province, the Congjiang exhibition area returned at the venue.
At the same time, the GMBPF continued to organise for exhibitors tours in Taipa and Coloane, Central and Southern District, and Northern District for sight-seeing and shopping, in order to extend the effects of the Fair beyond the venue so as to boost local economy and benefit small and medium enterprises in Macao.

The 2019GMBPF was again held concurrently with Macao Franchise Expo 2019 (2019MFE) in order to share resources and produce collaborative effects. The three-day 2019GMPBF has come to an end successfully, but its online services continue. The organisers have uploaded the data of all exhibitors and images of their products onto a website as a means of long-term promotion. If you wish to find again the well-known and high-quality enterprises and products, please visit our website, www.guangdongmacaofair.com.