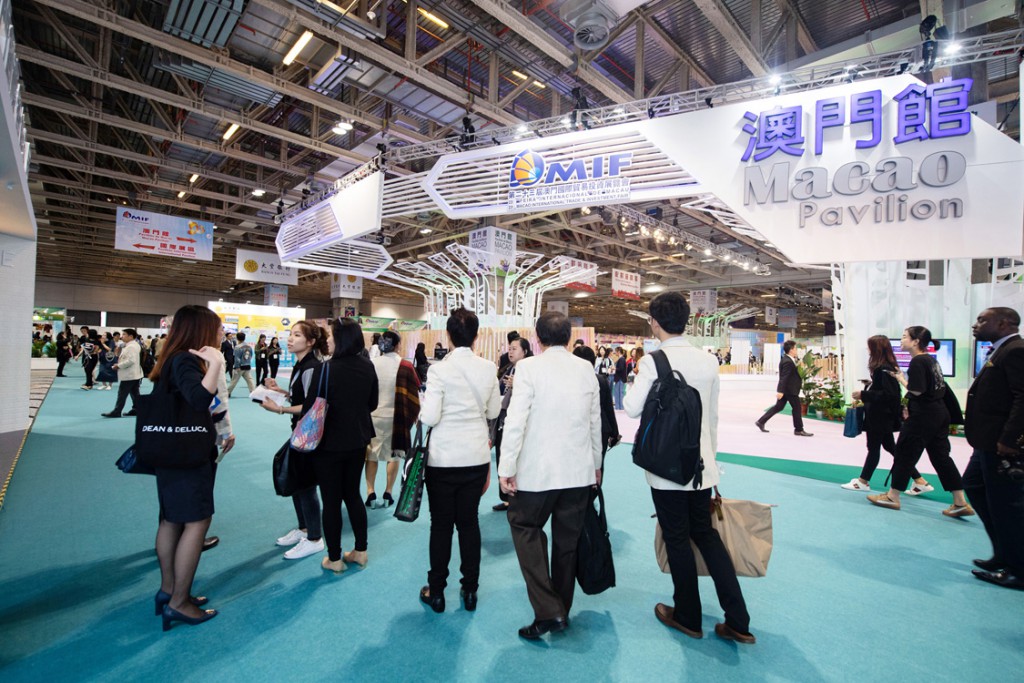 The 23rd Macao International Trade and Investment Fair (MIF) and the 2018 Portuguese-speaking Countries Products and Services Exhibition (Macao) (2018 PLPEX) were held concurrently at the Venetian Macao from 18 to 20 October. The three-day event drew delegates from around the world to explore business opportunities in Macao.

A total of  75 agreements were signed during the three days involving co-operation projects between governments and associations in convention and exhibition, cross-border e-commerce, tourism, cultural and creative industries, agriculture, green technology, human resources training, health big data research, manufacturing, as well as promotion and agency of products. More than 400 business-matching sessions were conducted at the Business-matching area.

This year’s MIF was again organised under the theme of “Co-operation – Key to Business Opportunities”, covering a total area of 24,000 square metres and more than 1,500 exhibition booths. Mozambique and Mainland China’s Fujian Province were invited to be the “Partner Country” and “Partner Province” respectively. A number of high-level themed forums, conferences and promotion seminars were held at MIF, including the 8th Asian Trade Promotion Forum (ATPF) Joint Exhibition. 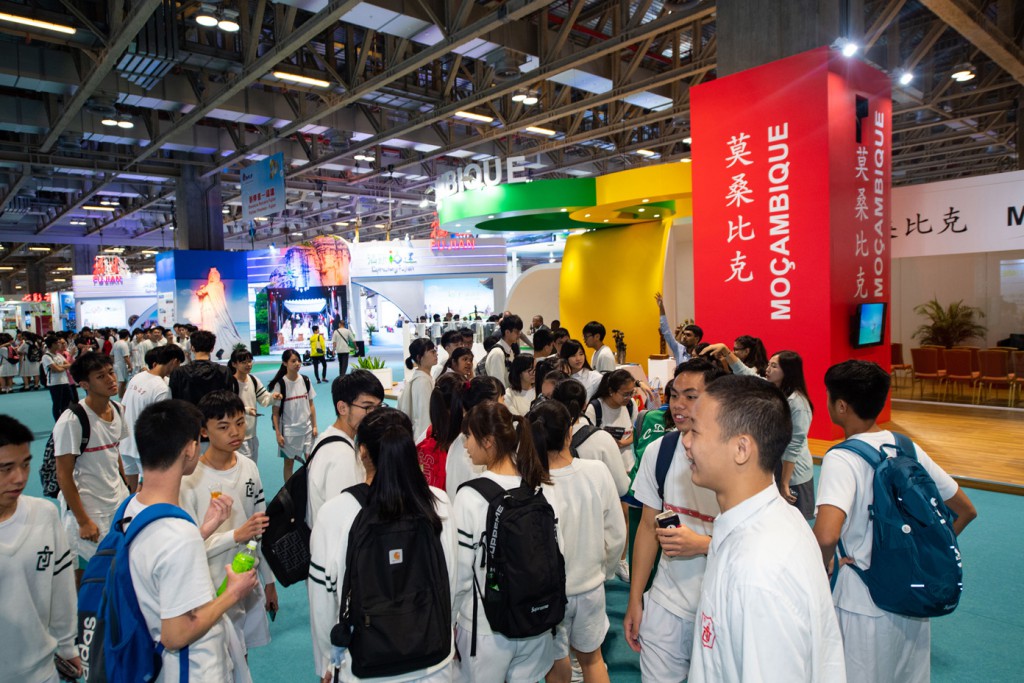 Mozambique was the ‘Partner Country’ of the 23rd MIF 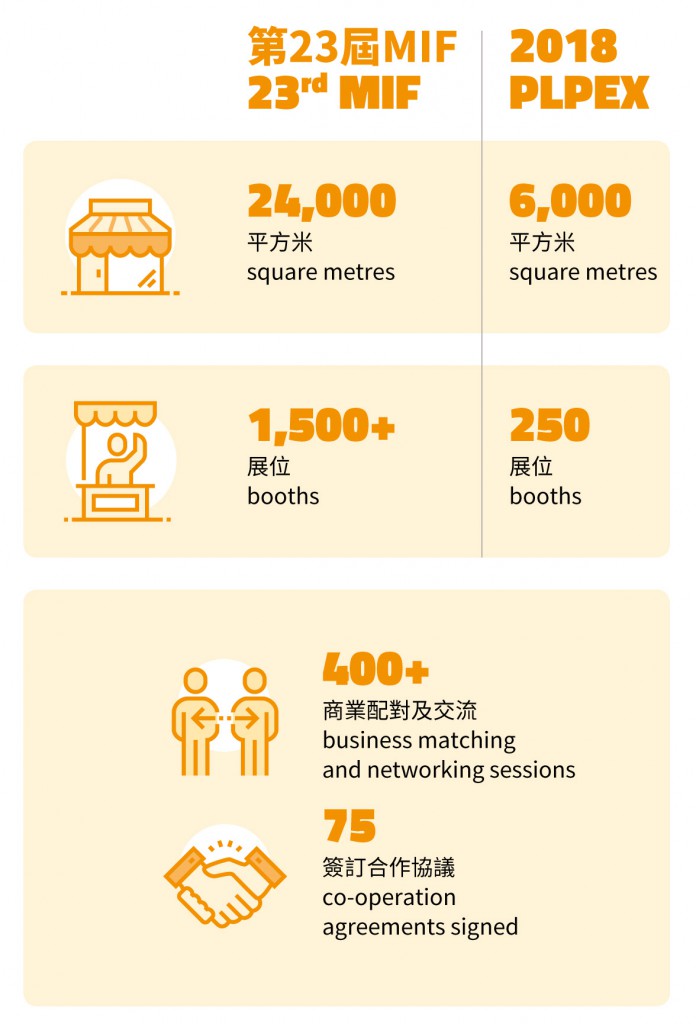 The event featured many industry-related and themed commodities exhibition zones and pavilions for the first time, such as the Guangdong-Hong Kong-Macao Greater Bay Area Business Zone, Guizhou Congjiang Pavilion, Smart Zone, Youth Entrepreneurship Zone and the Featured Finance Pavilion. They attracted a number of participants who wished to take a closer look and network with exhibitors.

At the opening ceremony, the Secretary for Economy and Finance of the Macao SAR Leong Vai Tac expressed his hope that, as a Commercial and Trade Co-operation Service Platform between China and Portuguese-speaking Countries, Macao would continue to play its role to connect and bridge China and Portuguese-speaking Countries, accomplish its historic missions and take advantage of new development opportunities in the new era in order to serve the country.

He added that he expected the city to make the most of its strengths, keep bringing in quality exhibitions and conventions in line with the “Priority to Conventions” strategy and build effective business-matching platforms for local and overseas enterprises and trade promotion organisations, so they could explore co-operation possibilities and share opportunities for their advancement. Mr Leong said he believes that in helping the country further open up to the outside world, Macao will achieve sustainable development of moderate economic diversification.

The two events assisted enterprises in embracing the opportunities brought by the development of the “Belt and Road” initiative and the Guangdong-Hong Kong-Macao Greater Bay Area, and utilising the strength of Macao’s role as a Commercial and Trade Co-operation Service Platform to explore more business openings. 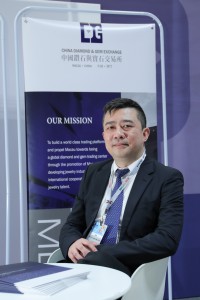 An inauguration ceremony of the Macau · China Diamond and Gem Exchange (MDGE) was held at the MIF. Chairman Su Wei said that MDGE was registered this year and after more than six months of preparation, they have decided that the inauguration would be held at the MIF. Mr Su noted that after the participation in MIF for the first time this year, they would join the event every year and invite people from all over the world to come for a visit, so more people would learn that Macao has established a world-class trading platform for diamonds and gems. He also called upon merchants as well as academic and training institutions to affirm Macao’s importance in the diamond and gem market.

Mr Su emphasised that following the changes in the industry and global economy, Macao is gradually developing into a leading global diamond and gem exchange platform. He explained that Macao is one of the few relatively economically advanced economies that does not have import tariffs, value-added tax or turnover tax, and has a strong capacity to receive goods. Macao, as a part of China, is backed by the Mainland Chinese consumer market. Mr Su is confident that foreign businesspeople will be attracted to Macao for its familiar and straight-forward legal environment under the “One Country, Two Systems” policy.

He also said that the China Diamond and Gem Exchange (CDGE) will give Macao even more of an edge. It is bringing in professional teams that will turn Macao into an important location for diamond and gem exchanges and trade. In the future, they will foster co-operation between global gemstone certification colleges and Macao’s academic institutions in opening gemstone identification courses to give local youths more career opportunities and to train talents for the Exchange to enhance Macao’s competitiveness.

Speaking from his knowledge of the industry, Mr Su said they expect to see around 1,000 international jewellery wholesalers, sellers and retailers to register in Macao as members of the Exchange. He also predicts 200 to 250 enterprises to register during the first year of its establishment. Given the global diamond and gem trade, he estimates that with the efforts of MDGE and CDGE, MDGE’s business volume will reach up to US$1.28 billion in the first two years and US$30 billion to US$50 billion annually when the industry matures in Macao. He even suggested that the jewellery business could become Macao’s second biggest industry after the gaming sectior in the future. 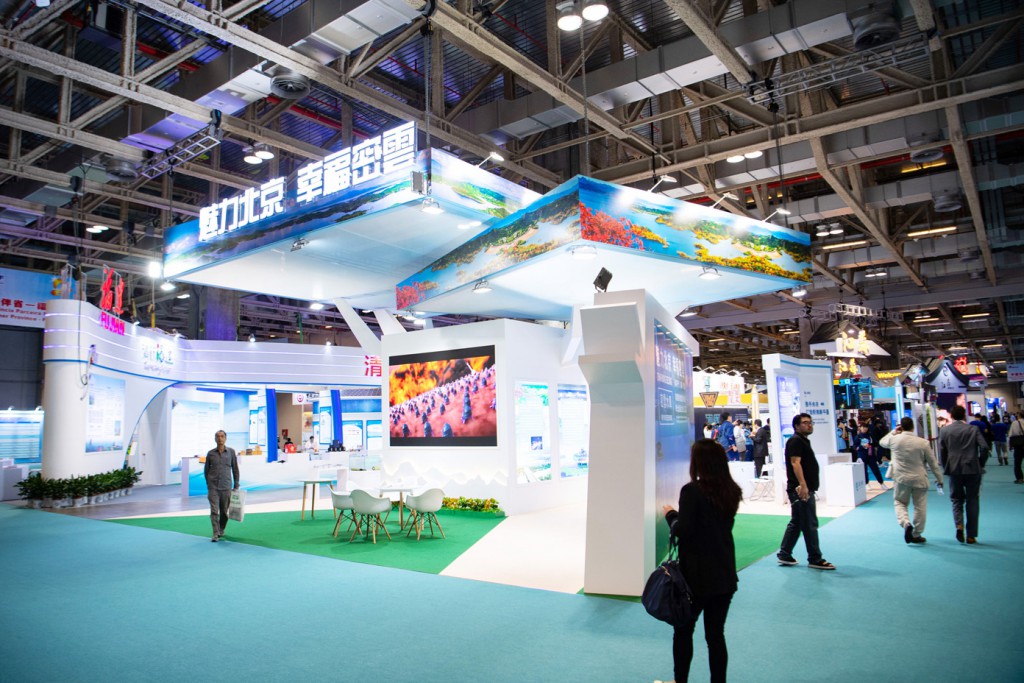 Fujian was the ‘Partner Province’ of the 23rd MIF

Mr Su added that Macao’s close relationship with Portuguese-speaking Countries is also an advantage. They have been discussing with the government of Angola, a major diamond producer, on ways to co-operate. He also intends to make use of Macao’s relationship with Mozambique to assist in the regularisation of the export of its red gemstones for them to reach customers. Thanks to MDGE’s connection with Macao, they could also help Brazil, a large gem producer, create new sales channels into Mainland China.

iFood Macau showed and promoted the Mainland intelligent point of sale (POS) system Keruyun at this year’s MIF. Chairman and Chief Executive Officer Lei Iam Leong said the system, which uses cloud and big data technologies, gives businesses an intelligent way to handle bookings, queues, orders, checkout and takeout processes and other procedures. It also improves their inventory and financial management as well as operational efficiency. It can be connected with mobile phones and employers can find out about their daily business revenues via the Keruyun App – anywhere and anytime. iFood also plans to expand the applicability of the intelligent POS system in other areas such as retail. 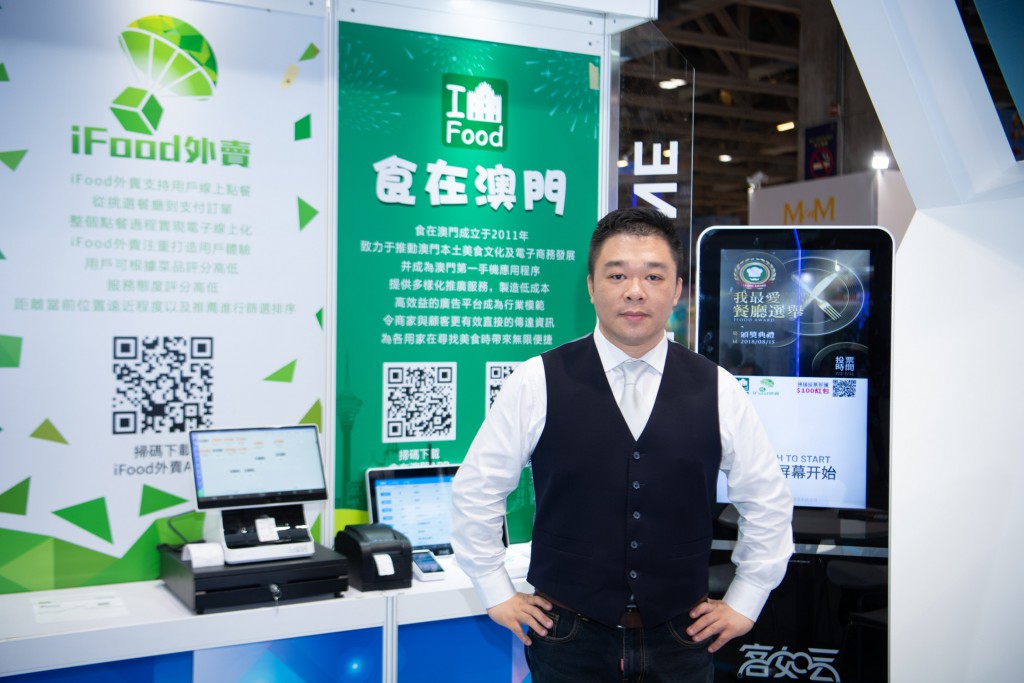 Mr Lei said the system has been well-received by local businesses since it was introduced to the city in early 2018. Now Keruyun has more than 100 users including traditional Chinese restaurants, cafés and diners. He believes as a platform, MIF will help attract attention to the system and expects the number of users to reach 500 in 2019.

iFood Macau has also set up an operations team of four to five members to offer round-the-clock enquiry and maintenance services. They will expand the team as their business grows.

As a first-time MIF participant, Lucky Technology Ltd introduced the Mainland business intelligence wireless POS (WPOS) system at this year’s event. Business Development Manager Raymond Ip said unlike the POS usually seen in shops, WPOS not only supports payment and authentication, but also works like a smart phone where users can download an array of available mobile apps. Examples of such apps include: takeout services, member marketing, group purchase and sales promotions. It saves business owners the trouble of installing multiple devices while reducing their operating costs and raising operating efficiency. The WPOS in Macao accepts payments via WeChat Pay. He anticipates that UnionPay will also be accepted by the end of 2018.

Currently nearly 100 local businesses are using the system and 40 taxis have installed it. The manager revealed that it was challenging to promote the system at the start, but many drivers have commented that it has effectively boosted their operating efficiency and made it easier for them to find out their daily operating expenses.

Mr Ip said participating in MIF helped promote WPOS’ strengths to a wider group of businesses and he hopes to increase the number of taxis with the app to 200 towards the end of 2018. Next, Lucky Technology will target wet markets to the benefit of Macao’s e-payment development. 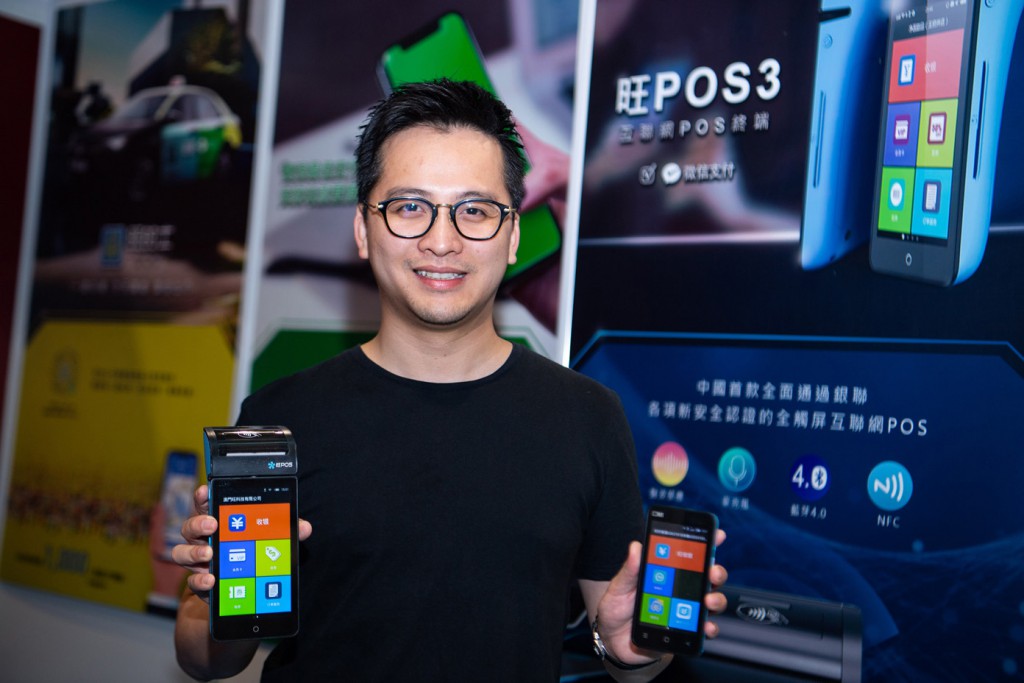